Sami Yusuf’s live performance at the Dubai EXPO, ‘Beyond the Stars’, is available now. 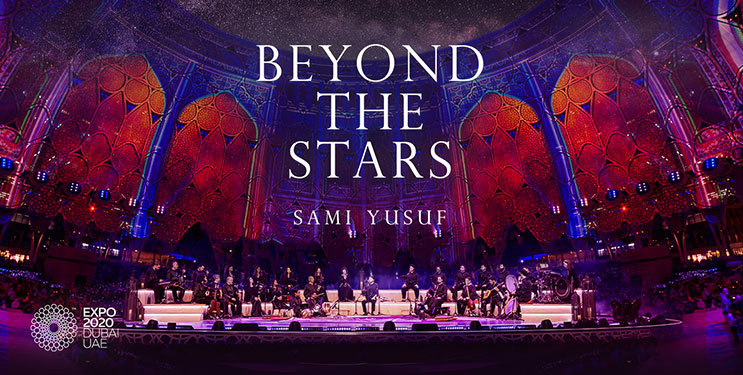 Visionary composer Sami Yusuf’s ‘Beyond the Stars’ is a celebration of the enduring and evolving musical traditions of lands from Europe to North Africa, the Middle East, and Central and South Asia. Inspired by a Quranic verse stating that nations and tribes were created to know one another, the composer seeks musically to answer the question: how? How do peoples of different religions, different languages, different ways of viewing the world have deep and meaningful dialogue? ‘Beyond the Stars’ is an exploration into a rich diversity of musical legacies and languages that celebrates how the spirit of a people communicates through music in a way unlike any other.

In ‘Beyond the Stars’ listeners experience the deeply emotive sounds of the Chinese erhu, the haunting strains of the balaban, the poignant Turkish ney, and instruments that crossed many borders throughout Central Asia and Middle East – the tar, the rabab, the kemanche, oud, santur and qanun. Rhythms are kept with percussions that were heard thousands of years ago as they are today. Latin poetry of the 12th century and Gregorian chant interact with Andalusian melodies and Arabic mystical verse. The voice of Rumi is heard in its original Persian and in a few of the languages where he is so loved today – English, Turkish, and Arabic. Azerbaijani mugham – one of the world’s great vocal musical treasures – lends its profound beauty to the conversation. And the exquisite ornamentations of the Indian sitar reflect Hindustani music’s central role in so many intercultural exchanges. Although qawwal means ‘to speak’ and thus qawwali music emphasises the meaning in the language that is paired with its sounds, still there is no misunderstanding the spiritual ecstasy invoked by the excellent musicians who brought it to the stage.

Some of Sami Yusuf’s new compositions in ‘Beyond the Stars’ include the powerful instrumental ‘Knowing One Another’ whose intricate interplays between musical traditions set the stage for what is to come while the ecstatic piece ‘For True Lovers’ featuring words by Turkey’s great Sufi poet Yunus Emre (14th c). ‘The Fire Within’ unfolds in multiple movements where Gregorian chant with Latin lyrics by Hildegard of Bingen (12th c) and Andalusian mawal with Arabic lyrics by Mansur al-Hallaj (9th/10th c) meet in a mystical dialogue. Joyous energy abounds in ‘I Have Come Alive’, a piece inspired by a Rumi poem that adds Azerbaijani mugham and Andalusian improvisation to this Persian masterpiece. Rich in Sufi allusions to the passion of divine love, ‘The Wine of Love’, with Urdu lyrics by contemporary songwriter Munna Shaokath Ali is a nuanced marriage of qawwali and Khorasani sounds in several movements.

– Sami Yusuf performed ‘Beyond the Stars’ on two nights in Al Wasl Plaza at the Dubai EXPO. This YouTube release is a compilation of the two performances, mixed and mastered for optimal quality.

Composed and arranged by Sami Yusuf
Mode: Navā [with allusions to the Aeolian mode]

‘I Have Come Alive’

‘The Wine of Love’